Westminster attacker was British and known to MI5

The attacker who killed four people near the Houses of Parliament before being shot dead was British-born and had been investigated by MI5 intelligence agents.

Khalid Masood, 52, born in Kent but living in the West Midlands, was named as responsible for the incident which left four dead, including a police officer and himself.

He drove into pedestrians and stabbed a policeman before he was gunned down by a police marksman.

Prime Minister Theresa May said in a statement to parliament: “He was a peripheral figure…He was not part of the current intelligence picture. There was no prior intelligence of his intent or of the plot.”

Islamic State claimed responsibility for the attack in a statement issued by its Amaq news agency, but did not name Masood.

Raids overnight led to eight arrests in seven locations in London and Birmingham. Police later said there was no indication of further attacks.

Westminster was returning to some semblance of normality today after 40 people were injured in the outrage.

Several pedestrians were “mown down” by a car which mounted the pavement on Westminster Bridge before crashing into railings. 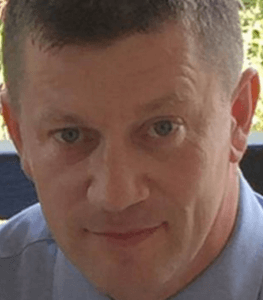 There were at least four gunshots and people fled the scene screaming as a man ran towards the parliament and launched a knife attack on a policeman who later died. Tonight he was named as PC Keith Palmer (right), a 48-year-old father with 15 years police service.

Foreign Office Minister Tobias Ellwood – a former army officer whose brother died in the Bali bombing in 2002 – gave mouth-to-mouth resuscitation to the police officer in New Palace Yard, Westminster, but was unable to save him.

Some victims on Westminster Bridge suffered “catastrophic” injuries, according to doctors treating the injured.

A woman was pulled alive but with serious injuries from the River Thames. At least three French students were among the casualties.

The Scottish Parliament was also closed for the rest of the day with business suspended, although there was no threat.

Holyrood business was also suspended and security was increased with immediate effect. The debate on independence has been postponed until next week as a mark of respect.

Britain’s top counter-terrorism police officer Mark Rowley said he believed the Westminster attacker was inspired by Islamist-related terrorism and that he was known to them.

There were reports of a second assailant, but this was later played down by police.

Leader of the Commons David Lidington told MPs the “alleged assailant was shot by armed police”. A number of MPs said they heard gunshots.

Mrs May was seen being ushered into a silver Jaguar car as the sound of gunfire could be heard.

She later said it was a “sick and depraved” attack on the heart of the capital and attempts to defeat UK values were “doomed to failure”.

Speaking in Downing Street after chairing a meeting of the government’s Cobra emergencies committee, Mrs May paid tribute to the “exceptional men and women” of the police force who responded to the attack.

“We will all move forward together, never giving in to terror and never allowing the voices of hate and evil to drive us apart,” she said.

The prime minister added: “The location of this attack was no accident. The terrorist chose to strike at the heart of our capital city where people of all nationalities, religions and cultures come together to celebrate the values of liberty, democracy and freedom of speech.”

Nicola Sturgeon, the First Minister, said the Scottish people felt “a sense of solidarity with the people of London”.

She said: “My thoughts, as I’m sure the thoughts of everybody in Scotland tonight, are with people caught up in this dreadful event.

“My condolences in particular go to those who’ve lost loved ones.

“My thoughts are with those who’ve sustained injuries and we all feel a sense of solidarity with the people of London tonight.”

She said Scotland would consider whether there were any wider lessons for public safety.

She added: “I convened a meeting of the Scottish Government’s Resilience Committee to review what is currently known about the incident at Westminster and also to review any implications for Scotland.

“(But) it is important to stress that there is no intelligence of any risk to Scotland.”

The incident happened on the first anniversary of the terror attacks at Brussels airport.