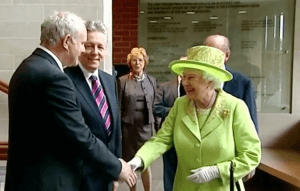 The Queen led tributes from the UK to the former Northern Ireland deputy first minister Martin McGuinness who has died, aged 66.

Buckingham Palace said Her Majesty, who famously shook hands with the reformed terrorist leader (pictured) in 2012, was sending a private message to Mr McGuinness’ widow.

The Irish republican died from a rare genetic disease in Derry’s Altnagelvin hospital. He resigned from the Northern Ireland assembly on 9 January. Vigils were held across Ireland and thousands are expected to pay their respects when his funeral takes place on Thursday.

His death has divided opinion, but there have been tributes to his attempts at restoring peace to Northern Ireland.

The Sinn Fein politician was the IRA’s chief of staff from 1979 until 1982. In the 1990s he admitted the terrorist war was over and played a key role in the peace process.

Along with Gerry Adams he worked with the new Prime Minister Tony Blair to negotiate prisoner releases that helped reach a settlement.

Prime Minister Theresa May said that while she can “never condone the path” Martin McGuinness took in his early life, he “ultimately played a defining role in leading the Republican movement away from violence”.

“In doing so, he made an essential and historic contribution to the extraordinary journey of Northern Ireland from conflict to peace.”

Tony Blair said Mr McGuinness showed “leadership, courage & quiet insistence that the past should not define the future.”

Irish President Michael D Higgins saod he learned of the death of Martin McGuinness with “great sadness” and added that “people across this island will miss the leadership he gave.

“As President of Ireland, I wish to pay tribute to his immense contribution to the advancement of peace and reconciliation in Northern Ireland – a contribution which has rightly been recognised across all shades of opinion.”

Social Democratic and Labour Party (SDLP) leader Colum Eastwood paid tribute to a man who made a “remarkable journey.

“History will record his political career as a journey – one born in a tradition of violence but, in a testament to Martin’s character, that arrived at his true calling in politics, people and the art of persuasion,”

Former Alliance leader David Ford tweeted: “Sad to hear of the death of Martin McGuinness. Since 1998 he has been a statesman, genuine leader and respectful Executive colleague.”