Carr steps down after 12 years 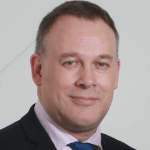 Scottish law firm Anderson Strathern has appointed corporate partner Bruce Farquhar (pictured) as chairman to succeed Robert Carr, who stands down on Friday after 12 years in the role.

Mr Farquhar began his legal career as a court lawyer in Glasgow before joining Anderson Strathern in 2001 and moving into corporate law.  He went on to set up the firm’s renewable energy practice and has played a significant role in building its client base in Scotland, the UK and across Europe and Asia.

He was a key mover in bringing boutique construction litigation practice ADLP into the firm and also recently brought in John Brett, former Aberdeen Asset global head as CEO in the firm’s asset management arm, ASAM.

Mr Farquhar said: “Having been part of Anderson Strathern for the last 16 years it is an understatement to say I am genuinely honoured to take over as chair.”