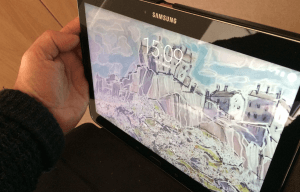 Air passengers are to be banned from taking some electronic devices on board as cabin luggage on certain flights.

The British government has announced a cabin baggage ban on laptops on some inbound direct flights from Turkey, Lebanon, Jordan, Egypt, Tunisia and Saudi Arabia.

The ban also applies to tablets and DVD players, and follows a similar US move to restrict devices carried by passengers travelling from eight countries.

Downing Street said it followed talks on air security and was “necessary, effective and proportionate”.

The ban applies to any device larger than 16cm long, 9.3cm wide or 1.5cm deep. It includes smart phones, but most fall inside these limits.

Transport Secretary Chris Grayling said: “We understand the frustration that these measures may cause and we are working with the aviation industry to minimise any impact.”

The US is introducing the new prohibition on flights connecting airports with eight mainly-muslim countries in North Africa and the Middle East.

The US ban involves laptops, tablets, e-readers and cameras – anything bigger than a smartphone.

US officials said bombs could be hidden in a series of devices, but the ban is likely to prove hugely unpopular, particularly with those who use devices during business trips.

The UK ban goes even further than the US move which does not affect national carriers.

It is not the result of a specific, identified terrorist plot, but of mounting concern in US and British intelligence circles at the ongoing interest amongst jihadist groups in the Middle East in blowing up a passenger plane in mid-air.

The US said that the decision was based on “evaluated intelligence”. US security fears point to al Qaeda in the Arabian Peninsula and its master bomb-maker, Ibrahim al-Asiri.

He is believed to be responsible for two bombs hidden in US-bound cargo planes in 2010 and is thought to have taught others some of his techniques. The cargo plane bombs were discovered before they exploded.

The attempted downing of an airliner in Somalia last year has prompted fears of a repeat incident. The insurgent group al-Shabaab smuggled an explosive-filled laptop on a flight out of Mogadishu and blew a hole in the side of the plane. The pilot was able to land the plane safely.