A planning bill this year will include 20 proposals based on the recommendations of an independent review carried out by a panel of experts last year.

Key proposed changes include zoning more land for housing, promoting self-build, and removing the need to apply for planning permission for more types of development. The consultation seeks views on new rights for communities to produce their own plans for their local area.

Planning minister Kevin Stewart said: “I would encourage everyone with an interest in planning – developers and businesses, professionals and local authorities, communities and members of the public – to tell us what they think of our proposals for change.”

It was pleased that fees are to remain competitive with like-for-like charges south of the border, but said it would have preferred the additional funds raised to have been used to improve the planning service in each local authority.

Paul Curran, chairman of the SPF, said: “It is important that we maintain our competitiveness. To grow the economy, we must kick-start more development across the commercial and residential sectors.

“These significantly increased planning fees must lead to a significant improvement in the speed and manner that major applications are dealt with.  The additional resources must be utilised to provide appropriate resources to deliver these critical improvements in the planning service.

“Currently the development markets in Scotland are seeing low levels of activity across the country as a whole although there are some hot-spots such as Edinburgh’s St Andrew Square.” The proposals were positively received by the country’s home builders. Nicola Barclay (right), chief executive of industry body Homes for Scotland, said: “We agree with the Minister for Local Government & Housing that planning should be inspiring, influential and focused on outcomes.

“Scotland needs significantly more homes for its growing population but builders are finding it harder than ever to make a start on new sites and get houses out of the ground.”

Ms Woodward, senior director at Nathaniel Lichfield & Partners, and head of its Scottish office, said a key issue is that the wrong type of land is being released for development.

She said: “Our recent research showed that over one-third of earmarked housing sites in Scotland’s central belt have little chance of being developed.

“One of the principal reasons for under delivery is the questionable viability of some of the land which is being identified.

“:Measures which help improve the quality of land being identified, which we hope this White Paper will deliver, will be warmly welcomed.”

NLP research has found that in some areas almost two-thirds of the allocated land for new homes have little hope of development.

Ms Woodward said: “In simple terms, the Edinburgh and Glasgow city-regions are failing to deliver the rate of housing that is required. Unlike in other parts of the UK, this is not due to a failure to prepare plans or to allocate land.

“Our analysis suggests one reason may be that the wrong land is being allocated in the wrong places.”

Ms Woodward said planning authorities may continue to allocate legacy sites whose current suitability has not been sufficiently scrutinised.

They may also be allocating brownfield sites which have remediation issues, or cleared sites on large housing estates which may not be attractive to the private sector, or alternatively sites on the edges of a village that is struggling to support a school. 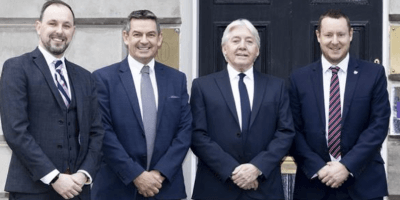