Property leader Chris Stewart yesterday led talks with Economy Secretary Keith Brown in the first meeting of a new forum aimed at underlining the status of the sector as a key economic driver.

Mr Stewart (pictured), chairman of the Scottish Property Federation, called for the creation of the Scottish Real Estate Forum and described the inaugural meeting as an opportunity to keep government abreast of key issues and developments.

The sector is particularly keen to ensure government understands the importance of overseas capital and that investors demand a low tax, low burden regime.

Government representatives from the tax, fiscal, property and infrastructure departments attended the meeting with leading figures from the real estate sector.

The Forum was first proposed by SPF earlier this year in meetings with the First Minister and Derek Mackay, Cabinet Secretary for the Economy and Constitution.

It is the first time that representatives across a spectrum of government departments responsible for real estate has worked with the industry in this way.

Mr Stewart, whose Chris Stewart Group is behind key projects such as the regeneration of Advocates Close and the Registers in Edinburgh, said:

“The Scottish Real Estate Forum is an opportunity to create a road map for economic growth through investment in commercial real estate, hotels, heritage and other urban building projects.

“By bringing together everyone who has an interest in commercial and residential property investment and development we have the opportunity to boost the economy across the country.”

Speaking afterwards he added: “The meeting was very productive with a genuine sense of commitment from everyone in the room.

“There was some important scene setting, but also a drive to resolve real issues that are a barrier to real estate development and therefore economic growth.

“As a result, the Forum is tasked with bringing forward improvements that can be made in the short term as well as the long term, and I’m looking forward to the next meeting in three months’ time.” David Melhuish (right), director of the Scottish Property Federation, said: “We are delighted that the Scottish Government have heeded our calls for a Real Estate Forum.

“The sector contributes almost £6 billion to Scotland’s overall output and there are in the region of 130,000 jobs which are reliant upon it, that’s why it’s so important that the sector and government get around the table to discuss the challenges and opportunities.

“We have a number of great companies and individuals operating in Scotland who have the skills to attract investment into Scotland and I’m keen to find out what further support the Government can offer to attract that investment.”

Mr Brown said the Real Estate Forum “is intended to bring together those government departments involved in property matters to work with representatives from industry to support greater investment in places, jobs and the successful delivery of real estate to support the economy, wider society and government objectives.”

Bishopbriggs has been home since 1973 HarperCollins, one of the world’s biggest publishers, is leavingRead More 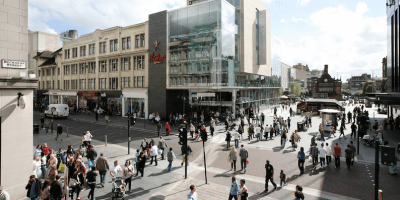 H&M is latest to sign new lease at St Enoch