Precision Printing is moving its London operations to larger premises to make room for a new print and packing service as well as the installation of a second new HP Indigo 12000 in 2017.

Precision moved into its current East London premises at Thames Road, Barking in 2005 and has since doubled the site from its original 1,670sqm footprint to 3,300sqm and pushed turnover from £5m to a predicted £22m in 2016.

Now the business has put Thames Road on the market for £4.25m and according to chief executive Gary Peeling “if everything aligns” will be moving around three miles down the road in January 2017.

“We don’t have an urgent requirement to move, but quite clearly we are going to need to move in the next year to two years so we are taking this opportunity,” he said.

“We’ve grown very quickly and very significantly within this space and that is likely to continue. We’ve swallowed up 1,860sqm in 10 years and we need the space to grow going forward.

“We have to have the right facility in the right location and there are a number available that have just come up, probably before we need them, but we don’t know if they will be available in two years when we would definitely need them.”

Mr Peeling said if the current plan went ahead smoothly the business would begin a staged transfer to a new 5,110sqm leasehold facility in January, after peak business season, and complete in March 2017.

The move has been planned to accommodate a new packing and mailing service to be offered by the company using its CMC Cartonwrap 500 that it bought in October 2015. The £400,000 device, which Precision uses to pack its photobooks and calendars, can pack up to 1000 boxes per hour from small single books up to A4 cartons.

“The working title for the new service is Robo-Pack,” said Mr Peeling. “The machine can wrap and mail 3D items, print or samples with personalised outer in corrugated printed boxes. We want to extend this as a service to other printers to distribute their print products and to brands to distribute their small samples, for example. We have the capability now, but we need the space to receive the inventory, pack it and send it out.”

Mr Peeling said he expected the new service to add £1m-£2m to the group’s turnover in 2017.

Meanwhile, Precision is currently three weeks in to the Beta testing of its Indigo 12000, which it signed for at Drupa and Peeling revealed that another 12000, signed for at the same time as part of a “double press deal”, would be delivered in June 2017.

“Indigo is critical to the success of our business and we are always keen to stay at the forefront of it. The 12000 represents a significant step forward,” said Mr Peeling.

Earlier this year 160-staff Precision Group, which also has operations in Sunderland, invested in two LED-UV RMGT (Ryobi) SRA1-format presses for its London site. Peeling said they were partly selected for their compact design, a feature he said remained very important for the business going forward.

“Space is expensive in London so we need to make sure we leave room to grow. We are determined to keep our London location because that’s part of our USP,” said Mr Peeling. 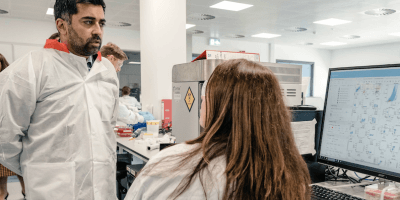