‘As an entrepreneur you need a high tolerance of uncertainty’ There is a party atmosphere in the Quartermile offices of fantasy sports company FanDuel. And it’s not just the Irish who are celebrating.

While Martin O’Neill’s men were completing a historic victory against Italy on the big screen, guests of the Edinburgh company were adding up their points to see whose virtual team had finished the evening on top.

Chief executive Nigel Eccles is buzzing about the room, about half the size of a football pitch, chatting with those staff still at their desks, and welcoming guests attending for a press night to try out the new games that will be launched in the first week of August.

During the day the office is filled with 160 staff, including software engineers, but until now all its customers have been based in the US and Canada where there are 57 million fantasy sports players, almost the equivalent of the entire population of the UK. Eccles, one of the firms’s co-founders, is excited about bringing the games to a home audience.

“It has been a year in development. We felt for years there was an opportunity in the UK market,” he says. “We looked at the existing products and believe we can do it better.”

FanDuel promises to change virtual gaming in Britain where fantasy league players been used to picking teams for an entire season. Daily fantasy sports is something new and from August it is expected to engage a customer base of between three and five million.

For him and others in the company, the UK launch is also an opportunity to switch the focus on to a positive story after months of battling with the US authorities over the legality of the games which critics claim are in breach of strict rules on online gambling.

The companies have always insisted that they are legal, but the battle has waged in the courts and state legislatures for months.

In the midst of all this, and threats of legal action from players and fans, some payments firms stopped taking money from customers. There have also been rumours of a merger between FanDuel and its big rival DraftKings, and even questions about the company’s financial stability.

So is there any substance to the merger stories?

Eccles smiles. “That has been asked many times over the past two years. The business is doing very well,” he says, enigmatically.

He says the two firms are “very similar” and he regularly talks to Jason Robins, his counterpart at DraftKings. But their mutual interest has never been more focused than in recent months.

Eccles recently warned legislators in New York, where the games companies agreed to suspend operations, that the company was prepared to leave Manhattan where it has its US head office, unless a bill was passed allowing it to operate.

So the decision by the New York authorities last the weekend to do exactly that has come as a huge relief. Was his threat just a bit of sabre rattling?

Eccles insists he was serious about relocating the business and reveals that there were tentative talks with other states. Fantasy sports have become big business and a company like FanDuel would have plenty of takers.

Although it has yet to make a profit, it produces a lot of cash which is re-invested in the business. Recent accounts show the group received $339.6m in funding rounds over the last 18 months and continues to hold discussions with other investors. Net assets stood at $244,034.

“We have three offices in the US and we look at where to invest. If New York was going to be unfriendly to us we would have asked if it was a state we wanted to invest in,” says the CEO.

“What we have seen is that six states want to innovate and support companies that want to push the boundaries. We are now working with DraftKings and others for the benefit of the industry.” This extends to developing ideas around regulation and consumer protection which he says was always going to happen. He admits that this collaboration may have played a part in speculation about mergers.

The ban on operating in New York was potentially damaging to the company as 10% of all daily fantasy games players are based in the state. The agreement to suspend activities in some states led to a loss of almost 20% of turnover.

Needless to say the legal action has encouraged the company to look to other markets outside the US for the next stage of growth.

The launch of the games in the UK will be followed early next year by moving out of its current offices on the former hospital site which it shares with Skyscanner, a fellow “unicorn” – companies valued at $1 billion. The new offices are across the road in Quartermile 4 where the next stage of the sprawling business and residential development is under construction.

It will allow the company to house another 50 staff, says Eccles, who told an Edinburgh audience last year how it had become one the top five advertisers on US television.

“Last year it was about getting recognition. This year it is about selling to people who are already aware of us,” he says. “We are not even on TV at the moment.”

The campaign helped create an 85% brand recognition, although it is hard to calculate how much the publicity around the legal battles also raised the company’s profile.

Eccles sees the whole episode as part of a process that would inevitably lead to regulation of the industry, something he has actively supported.

He insists the legal action did not detract too much from the company’s progress and plans, nor did it impact adversely on him personally or his wife Lesley who, with a group of friends in Edinburgh, launched the company in 2007.

“Being an entrepreneur is for people with a high tolerance of uncertainty,” he says. “It was never going to be easy being the CEO of a high growth start-up.

“We have been in situations where we were one week away from not closing a funding round. That has happened a couple of times. So we are used to dealing with uncertainty. This one was definitely up there, but it was not something that was more serious than other challenges we’ve faced.

“We have an exceptional team, both here and among those who were representing us, and I was always confident that we would get the right result.” Birthplace: Cookstown, Northern Ireland. Grew up on a dairy farm.

You have operated almost entirely in North America but it all started here with help from Scottish Enterprise. How important was that?

“I think without the co-investment fund we wouldn’t exist because they encouraged Pentech to take an investment in us.” 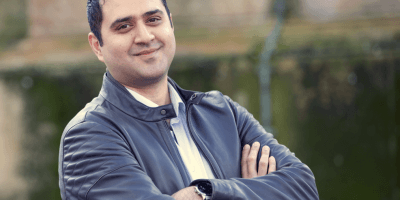