New Day to close on Friday after just nine weeks Trinity Mirror is to close its new national newspaper just nine weeks after it launched with hopes of achieving 200,000 daily sales.

The last edition of New Day will be printed on Friday with sales apparently below 40,000 and continuing to fall. It was said to have a break even sales figure of 100,000.

Its demise will not come as a shock to those who raised eyebrows when the company launched a newspaper into a market seemingly out of love with newsprint.

New Day hit the newstands on the last day of February, just weeks before the last national newspaper to launch – The Independent – ceased publication as a printed newspaper.

Simon Fox, Trinity Mirror chief executive, may be forced to explain his misplaced confidence in the project at Thursday’s annual general meeting.

At the time of the launch he claimed there was a gap in the market for a paper that would adopt a more optimistic and politically neutral tone. The 40-page daily paper, initially priced at 25p, was selling for 50p, an was aimed primarily at women.

In a statement issued ahead of the AGM the company said: “Although the New Day has received many supportive reviews and built a strong following on Facebook, the circulation for the title is below our expectations.

“As a result, we have decided to close the title on 6 May 2016. Whilst disappointing, the launch and subsequent closure have provided new insights into enhancing our newspapers and a number of these opportunities will be considered over time.”

Critics said it was not adequately marketed, although £5 million was invested in promoting it. But the main criticism will focus on the board’s poor judgement of the sector’s move away from print.

The industry is also facing a severe fall in print advertising revenue, making the decision to launch a newspaper even more of a gamble.

Print advertising revenues have fallen 16% in the first quarter of this year, according to Nielsen, the research group. Other titles, notably The Guardian, are looking at severe cutbacks.

Trinity Mirror last year acquired Local World, the local newspaper publishing group, for £183m which is more than half the company’s current market capitalisation of £320m.

The company will says the trading environment for print advertising continues to be “volatile”.

In a trading update it says: “We continue to focus on the delivery of our strategy, namely growing our digital audience and revenue, coupled with tight management of the cost base. At this stage, the Board anticipates performance for the year will be in line with market expectations.

Group revenue fell on a like for like basis over the period by 8.6% with a 9.3% decline in the first quarter and an improved rate of decline of 6.4% in April.

The company continue to see strong growth in digital audience with average monthly page views, excluding galleries, across the publishing sites growing by 22% to 755 million on a like for like basis.

Trinity has also invested in digital innovations, including Dublin Live and Glasgow Live in April, following the success of Belfast Live last year which achieved a month audience of more than 1m unique browsers within five months.

It has also launched a mobile app, Perspecs, which presents the three sides to a news story, allowing users to switch between different news sources presenting opposing views. It has obtained funding for further development from the Google Digital News Initiative Fund.

The company said “excellent progress” has been made at Local World on the sharing of best practice across the group.

“We are now into the final stages of planning the systems integration with implementation commencing in the second half of the year. Digital platform integration is being prioritised given the significant opportunities to grow audience, revenue and profits in a growing digital advertising sector.”

The company said it continues to settle the claims in relation to phone hacking.

“There is no change to the provision made for dealing with these historic issues and, whilst there remains uncertainty, the board continues to believe that the exposures in relation to these matters remain manageable and will not distract from the delivery of the group’s strategy for growth.”

The business continues to deliver strong cash flows with net debt falling by £29 million from £93 million to £64 million. The net debt is before the payment of the final dividend for 2016, which is payable on 10 June 2016 subject to approval by shareholders at the AGM today.

> As I See It: Terry Murden on the demise of New Day 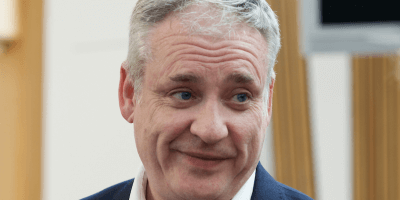 Scots and Welsh ministers in joint call to retain Erasmus