100 to be exported this year Glasgow manufacturer Gaia-Wind has sold its first turbines to Japan and has revealed that it expects to sell more than 100 to the country this year.

Following the establishment of Gaia-Wind KK the company has built a network of resellers including YBM Japan, LOOOP, and the Green-Power Corporation.

Gaia-Wind chief executive Johnnie Andringa (pictured) said: “This contract gets our Japanese venture off to a flying start. It is we believe, the first of many.

“Japan has a market size 1.6 times that of the UK and the most attractive feed in tariff in the world. Our Japanese reselling partners are gearing up to help deliver what Japanese Consul General in Scotland  Mr Kitaoka described as the conversion from atomic power to renewable energy after the Tsunami disaster in 2011.”

Mr Andringa added: “We confidently expect to sell over 100 turbines into japan over 2016 and in time to achieve double that amount annually.”

He was critical of UK policy. “Following the disastrous effects of botched UK support mechanisms, our export strategy will see us reducing our exposure to the UK domestic market to around 15% of our total sales,” he said.  “This will protect and indeed generate jobs in a tough farm scale renewables environment.”

Mr Kitaoka said: “I was most pleased by the splendid news that GAIA Wind has succeeded in selling wind turbines to Japan. For me, especially after the tsunami in 2011, I believe Scotland is an important teacher in the promotion of renewable energy. Just like Scotland taught Japan for modernisation in the 19th Century.”

He described the company’s products as “the world’s most advanced wind turbine”.

“The company’s confidence in grasping opportunities and exploring new markets has made them one of the market leaders in the small wind sector, and their commitment to promoting Scottish engineering abroad is to be commended.”

Some 1200 Gaia-Wind turbines have now been running for a combined operational time of more than 20 million hours. That’s almost 2,500 years of dependable, renewable energy generation.

In Denmark, almost 100 Gaia-Wind turbines have been running for more than 10 years. These turbines have contributed more than 30,000MWhrs of green electricity, delivering “energy independence” for their owners and that much less strain on the grid. 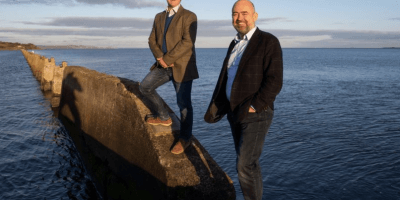