Game on for craft firms at Perthshire show

The Scottish Game Fair was in danger of becoming a washout yesterday which would have denied thousands of visitors the chance to sample some of Scotland’s remarkable range of small enterprises.

After Friday’s bumper attendance under blue skies, the Scottish weather reminded all involved not to take anything for granted.  A dry afternoon encouraged more waverers to enjoy the mix of country entertainment and largely craft-based businesses who reported brisk trade in the final hours of the day.

The event continues today and visitors will be treated to some of Scotland’s finest and most inventive craftsmen and women. Here is a small sample of the businesses exhibiting: The Chocolate Tree: Husband and wife team Alastair and Friederike Gower run one of the UK’s few ‘true’ chocolatiers – a maker of chocolate, rather than chocolates – which they produce at their Haddington factory from beans sourced from Madagascar and South America.

The couple, who have a shop in Bruntsfield, Edinburgh, developed the business after taking their chocolate treats around music festivals. They are now turning over £600,000 a year and building sales in Germany, Holland and Sweden. Friederike designed the packaging based around the countries providing the beans. Eden Mill: Scotland’s only combined distillery and brewery says it is “gloriously, unashamedly, wilfully small”. It’s quite a big selling point for the St Andrews based business whose range of beers, gins and whiskies are being exhibited by the owner’s daughter Victoria Miller.

The company’s promotional material is nothing if not intriguing: “Few gin makers can be as fortunate as us. We have paradise at our disposal,” it says. “We will not, will never, mass produce,” it declares, in what reads like more like a manifesto than a marketing document.

If you’re looking for “can do” attitude they seem to make it on the Fife coast. KLG Deehide: Kathy Greaves began learning about leather working prior to her retirement from Aberdeen university medical school where she worked as a clinical tutor and admissions dean. When she left in 2012 she bought lots of leather and practised on it, also attending courses in London.

Her hand-stitched range applies traditional skills to contemporary design and they are made in her studio at home in Banchory. She says she works from breakfast to midnight, but it’s become a passion. “I have an addition to bags,” she says. MoMo Chapeaux: Milliner Morag Young based in Ballachulish was a hotelier who went to college in Edinburgh to learn about hat-making and believes she can blend her love of design with a traditional skill.

“It is artistic, like painting with materials,” she says. Her business has been running for five years and she sells mainly through the internet, but also at shops and at fairs such as the Scone event. Daniel Campbell, Original Art: Daniel, now 64, graduated from Glasgow School of Art and has been working as an artist ever since. Based in the east end of the city, he was an artist in the print industry He is a regular visitor to the Scone show. Other exhibitors include: Vizualedinburgh, a design and illustration business with merchandise and original paintings on an Edinburgh theme; and Jaggy Thistle Design (above) which makes handknitted textiles and cards. There are opportunities for gnat shooting (above, similar to clay pigeon shooting but involving a remote controlled ‘airplane’); and displays of cookery (Christopher Trotter below)  and everything from dog shows to stunt bicyclists. 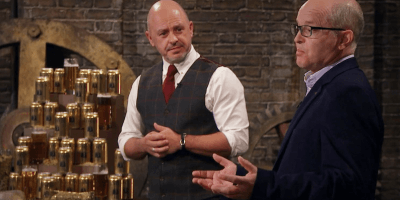