Nicola Sturgeon refused last night to rule out a second independence referendum in what will be seen as the key bargaining chip in any deal with whoever wins the General Election.

After pledging to accept last September’s vote and seemingly drawing a line under the verdict, she told a leaders’ debate in Edinburgh that she may revive plans for another poll after next year’s Scottish Election.

Her comments drew boos from an audience which had been selected as a representative sample of the population.

“I respect the result of the referendum last year,” she said under questions from the audience and STV presenter Bernard Ponsonby. “The country did not vote yes and I respect that,” she added, stating that just because someone votes for the SNP on 7 May it did not mean they were voting for another referendum.

But when pressed on what would happen after 2016, she said: “That’s another matter.”

The issue is bound to reopen arguments over the First Minister’s commitment to the result of the referendum and what some regard as the “settled will” of the people.

She also looked vulnerable on questions over handling the deficit and her spending plans.

Ms Sturgeon was pressured to say whom she would be prepared to see in Downing Street and at one point declared she was trying to help Labour leader Ed Miliband, effectively distancing herself from a controversial leaked memo at the weekend suggesting she preferred to see David Cameron as Prime Minister.

But Mr Murphy refused to accept her offer of some form of deal with Labour, telling the First Minister: “We don’t need your help.”

Mr Murphy found himself on the wrong side of Ms Davidson who accused Labour of causing the economy to crash and saying it was the Conservative party which had repaired it. 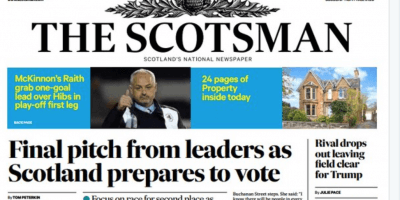